Support for SchuWebExtensions on JSE

User svanschu asked if they could use JSE to provide support for their extensions.

I would like to use this community to give support for my Joomla! extensions.

Would this be ok for the community and could someone create a tag for me?

Let's discuss this within our community. As this is something that we currently don't support officially - meaning that JSE will be the primary channel of support for specific extensions. A decision on this will act as a frame for future possible requests.

My thoughts is that this is something that could work and could benefit JSE - but it is important that:

Can I support my product on this site?

There is no question in my mind that the Stack Exchange Q&A format is far superior to all existing forums, support ticketing, and thread-based correspondence.

While this decision is an invitation to "function creep" and potentially questions that have little or no relation to Joomla, I think there could be some exciting benefits to encouraging extension support here.

**Either way this thing goes, the truth is, all all on-topic Joomla-related questions have a place here. If they are beyond the scope of this community, they will be closed and deleted. Creating tags is not a problem. For those that do not have tag-creation privileges, don't worry; those that do (like myself and others) can easily update a posted question.

I don't think anything fundamental has to change here. Responsible/Caring extension developers will need to provide a channel of communication for their customers' questions that do not fit in this community.

I think this is an important discussion.

I'm a small one man show, with some small extensions. I shut done my own forum, because of a small number of requests per year and the GDPR. I just want to keep the overhead as small as possible to have more time for developing.

I saw already extension specific tags at JSE, so I thought I could extend my support to this platform to. As you can see on my support page I give support on 3 public forums already and people can choose their prefered and just send me the URL with a small form on my website without personal data.

My opinion is that own hosted support systems make sense for big projects as Kunena, Akeeba, Event Booking etc. But for small projects a ready to use forum or StackExchange is a nice to have.

I could say my users should use StackOverflow, but I would prefer to keep those stuff inside the Joomla family.

@mickmackusa as far as I can see (as new member too) you can exklude tags on the right side. 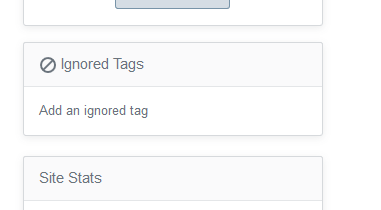 my initial thought would be no, JSE shouldn't be used as client support for extensions.

I am not against helping people with Joomla, but I think that it might potentially open a gate that might be very hard to shut later on and trying not to sound elitist I believe such a move would dilute the quality of JSE, particularly in the questions being asked.

I am only new to answering/posting on JSE myself and trying to payback the help I have received by checking the questions most days to see if there is something I can help with. If even only a handful of extensions developers, maybe a few popular ones, offered user support here the volume of questions to trawl through each day would become very time consuming, with more rocks than diamonds creating diminishing returns/benefits. I expect would just go back to using JSE for searching for solutions to my own problems.

The OP gives some indication of why he wants to do this on his support page, https://extensions.schultschik.com/support .

I don't think the original OP is expecting everyone to answer his support requests and the suggestion of using Tags would work well for him, but I can't see any way for me to exclude Tags for extension support questions that I would not be interested in.[Corrected: see comments]

Previous questions specific to an extension and templates that have been asked and the person is referred to contact the developers support site. If this extension support was taken up on JSE then the active individuals would be filtering/moderating posts saying you need to contact the developer or no that developer lives here so you need to Tag it so they will see it. I would rather see the active people like Lodder, Mick, Scholle, FF answering questions not spending their time moderating and redirecting posts.

There would also be the issue of paid support where a customer of an extension developer may not be happy with the quality of support they receive, if it then becomes an issue we all get dragged into it. While we might understand the distinction about where the support is to come from, an angry customer might not and if it is a commercial interest then legal people could be involved. It has got ugly written all over it.

The technical structure of SE doesn't seem to support individual 'vendor spaces' like you could with any number of forum packages that have sub boards.

I can't really see any benefit for JSE, sorry.

I have another view that is supportive of the OP's request but as I can't comment yet I have to provide it as an Answer.

I think @svanschu has gone about approaching this request correctly, asking if it is okay first,and his request seems to be inline with JSE guideline as provided by the Andrew T. link. His support page shows that JSE would be just one of a number of channels for him to provide support and people are asked to email him and let him know when a post has been made.

In all it seems to me to be the model way to approach this style of distributed support on JSE for small, one person, low traffic, extension support.

One aspect not mentioned so far is from the point of view of his customers and if I was one I would appreciate not having to sign up to yet another forum/support site just to ask an ad-hoc question and if I knew there were other developers whose extensions I use on JSE I would ask my question here as well.

I even thought of a situation I find myself in with little plugin I wrote last week to solve a canonical Link issue I was researching for someone that if I made it available for anyone to use, how would I handle support. I could make email and JSE my support channel. :)

And the other thought which really underlines my worst case, armageddon scenario, answer from the other night which probably came over a bit strong is that there should be at least some mechanism to deal with overwhelming traffic or low quality Q & A's from someone using JSE to offer support.

Such a mechanism, maybe member voting or a threshold or something, needs to be something on an individual basis so that someone like the OP who does the right thing does not lose his support channel because of the actions or inaction of someone else.

In essence it should be a privilege and not a right to be able to use JSE as a support channel.

I'm not convinced we need any official "ruling" on whether third party extensions are supported on JSE.

As others have pointed out, there are already quite a few tags in relation to third party extensions.

In practice, questions about popular third party extensions are often asked and answered with no issues or complaints.

When questions are asked about less well known extensions and are left unanswered for a while, they can be flagged and closed as "off-topic". This is especially true for paid extensions where the developer is reasonably expected to provide the support.

I’d be very short and simple on this. I consider absolutely a bad idea to use JSE as support space for any kind of Joomla extension. StackExchange has totally different system, structure and policies than a detailed Q&A support system (or support ticket system). Support takes many times a lot of private questions, sub-questions on different issues to figure out what the specific problem of a person is. It would take a lot of comments (q&a) that most of the people understandably do not like and it is basically frowned upon here.

I understand that for an extension developer it is a good (tricky) marketing idea to place his extension (and the questions about it) in a very visited Joomla place where potential users are reading every day, but this place is not for these kind of things. And on the top of that, most of us will get very bored reading the problems about this particular extension every day. :)

This is just one fast example out of possible hundreds, about how a support would go here with a lot of Q&A on a question: Adding articles to a local copy, then pushing them to the live version

And it can get much worse (as it happened with me few times when comments got a never ending story and came out that the person does not even know how to comment out something in a PHP code, but he wants to edit core Joomla codes and so on...). The question looks simple first then in the comments it comes out that the person has problem with totally something else than what is explained in the question. After a while moderation steps in and so on... (you can start chatting with a person of course). I mean, for me it’s not a problem, I just wanted to pick up an example why SE, due to it’s basic structure, is not suitable for being an application/extension support platform. And this particular question and answer will not help anybody in the future actually even if it is cleaned up.

And of course my opinion above does not mean at all that if a question comes up about an extension then the developer should not be here to help in answering the questions about his own extension. He is, I think, more than welcome here to do that.

1
Not sure if the question below is more opinion based, or can actually get proper answers
5
Promote JSE using Community ads
4
Joomla magazine article for JSE
2
Sample Questions - Joomla Support Request Template
7
Are questions about configuring 3rd party Joomla extensions 'on-topic'?
1
Why don't JSE moderators trash unnecessary comments like other SE sites?
7
Community Promotion Ads — 2020
0
Do we want accepted answers to be unpinned on Joomla Stack Exchange?